Light Novel / Beyond the Boundary 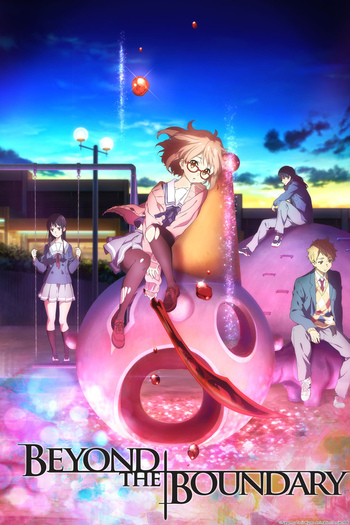 Beyond the Boundary (also known in Japanese as Kyōkai no Kanata) is a Japanese light novel series by Nagomu Torii, with art by Tomoyo Kamoi. The light novel was published in June 2012 by Kyoto Animation as part of the prize for winningnote technically an honorable mention as they couldn't decide on a single winner that year, so each member of the four-way tie was published and the cash prize was equally split amongst them a writing contest they held. The novel was adapted into an anime, also by Kyoto Ani, for the fall 2013 Anime Season.

The story follows a high school junior named Akihito Kanbara. Although the boy appears human, he is half yōmu and invulnerable to wounds because he can heal quickly. One day, Akihito meets freshman Mirai Kuriyama when it seems she is about to jump from the school rooftop. Mirai is isolated because of her ability to manipulate blood, which is unique even among members of the spirit world. Disturbing events begin to unfold after Akihito saves Mirai.

The first trailer for the anime was released May 24, 2012 on Youtube. The anime adaptation ran from October 2, 2013 to December 18, 2013. Kyoto Animation produced the series and it was directed by Taichi Ishidate (marking his official directorial debut, having served as co-director on Nichijou), and written by Jukki Hanada, with Miku Kadowaki serving as character designer and chief animation director.

A prequel OVA was released in July 2014, and two movies, titled Beyond the Boundary I'll be here, were released in spring 2015. The first, Kako-hen ('Past Chapter'), is a recap of the TV series. The second, Mirai-hen ('Mirai Chapter' or 'Future Chapter'), takes place one year later.

Not to be confused with The Garden of Sinners

Akihito and Hiromi comment that not only is Mirai adorable and petite by herself, but her red frames add an extra layer of cuteness.

Alternative Title(s): Kyoukai No Kanata, Beyond The Boundary

Akihito and Hiromi comment that not only is Mirai adorable and petite by herself, but her red frames add an extra layer of cuteness.