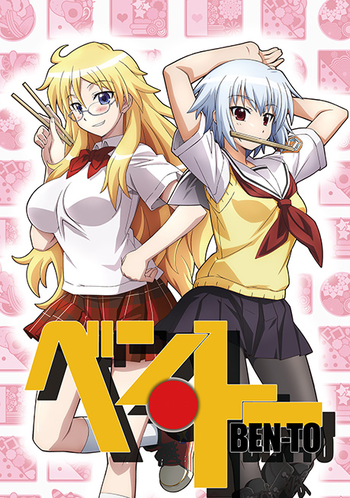 Ben-To (ベン・トー) is a comedic Japanese light novel series written by "Asaura," with illustrations by Kaito Shibano. The story was spun off into a manga prequel (Ben-To Zero: Road to Witch) and an anime adaptation that premiered in the Fall 2011 season. Funimation picked up the US streaming rights in February 2014 and released the dub Summer 2014.

A freshman high school student named Yō Satou sees some half-priced (translate: 4-hour old) pre-packaged bento (think: lunchboxes) in a nearby grocery store, and goes to grab one, only to end up unconscious on the floor of the store a brief moment later. He soon discovers that the half-priced bento are Serious Business in this neighborhood. A group of young punks referred to as "Wolves" fight each other in a series of ultra-violent brawls just to get one of the discounted packages, and Satou is warned to stay away from them if he values his life.

However, he continues to ignore the warnings of both his classmates and the stockboy at the store until one day, when the "Ice Witch" offers to train him in the ways of the Wolves. With her help, he just might survive long enough to buy a half-priced bento box at the grocery store.