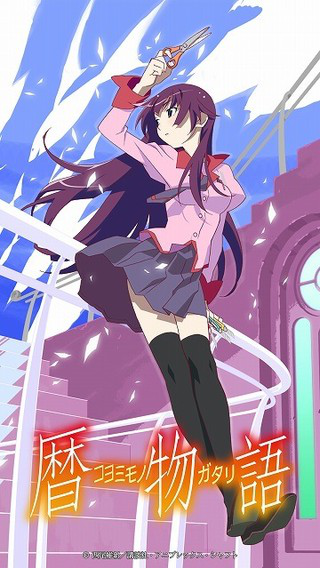 The Monogatari Series is a franchise of Light Novels and associated media projects, with the original novels written by NisiOisiN and illustrated by VOFAN.

The series follows Koyomi Araragi, an initially mundane, if introverted, high school student who encounters a vampire just before his senior year. The experience draws him, and eventually, his family and friends, into the supernatural world of "aberrations", spirits who prey upon the emotional turmoil of humans, and the "specialists" who study and hunt them.

Much like the rest of Nisio Isin's work, Bakemonogatari parodies or otherwise examines a number of Japanese fiction tropes, particularly those typical to the Harem Genre. Each chapter focuses on a different girl and the affliction that ails them, each one an examination of a different anime girl stereotype. For example, main girl Hitagi is a Tsundere (or so she says), Hanekawa is the Bespectacled Cutie, and so on. Araragi himself is an Unreliable Narrator, so much of his opinion of who these girls are can bleed into their portrayal in the series, making it so that we often learn more about Araragi at the same time we learn about the girls.

Studio SHAFT adapted Bakemonogatari into an anime in 2009 under the direction of Akiyuki Shinbo, the man behind the surrealism of Sayonara, Zetsubou-Sensei. The adaptation has been a huge success, and the studio has stated they will adapt the entire series (even as Isin keeps writing more and more). As noted in the list above, the first three novel seasons have been adapted to anime in some form, including broadcast series, original net animations, TV specials and theatrical films.

As for English releases, Aniplex USA released the first season of the anime in North America in November 2012 and Nisemonogatari in February 2013. They released Monogatari Series Second Season, Nekomonogatari (Black), Hanamonogatari, Tsukimonogatari and Owarimonogatari. Meanwhile, Vertical began releasing the novels in English with Kizumonogatari in December 2015 and translated up to Zoku Owarimonogatari.

A manga adaptation of the series began in 2018, illustrated by Oh! Great (of Air Gear and Tenjou Tenge fame).

And, no. Ore Monogatari!! is in no way related to this series. Nor is Umi Monogatari. Same thing with Katanagatari, even though it is written by the same author.

The Monogatari series provides examples of the following tropes: