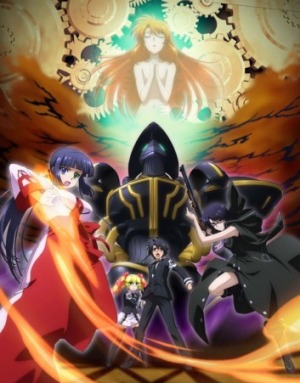 Tomoharu Natsume one day receives a mysterious package from Shuri, a friend of his older brother. This box, called the Extractor, is sought after by many. At the same time, Tomoharu has to keep secret the fact that his childhood friend, Misao, is constantly hovering, ghostlike, beside him. Then a miko with heterochromia breaks into his house searching for the Extractor. After a fight breaks out in his house, he opens the box. What lies within is a mecha-like creature called the Asura Machina. That is only the beginning.

Asura Cryin' is a series of Light Novels written from 2005-2010, concluding at 14 volumes. An anime adaptation by Seven Arcs was released in the spring of 2009, with a second season following in the fall.

Do not confuse with Asura's Wrath (though the main character of that series is also mechanical, in a sense).