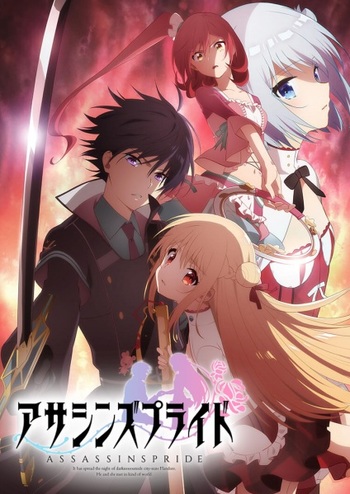 The sun, moon and stars have long disappeared from the sky, leaving the world in eternal darkness. The remains of humanity live inside Flandore, the last city-state, while monstrous beings roam free in the endless night outside. However, humanity has gained a power called Mana that allows them to fight those monsters, and those who hold that power form the aristocracy that rules over the common people in Flandore.

Among those aristocrats, a girl is born without any talent to use Mana. A youth named Kufa is dispatched as a tutor to find if Melida Angel has any Mana inside her. If she is not talented, he must assassinate her. However, Kufa is inspired by Melida's determination and decides to do everything in his power to ensure that the day where he kills her never arrives.

Assassin's Pride (アサシンズプライド) is a fantasy light novel series written by Kei Amagi and illustrated by Nino Ninomoto, published since January 2016. A manga adaptation illustrated by Yoshie Katō started serialization in Shueisha's seinen manga magazine Ultra Jump in May 2017. An anime adaptation by EMT Squared premiered on October 10, 2019, simulcasted by Crunchyroll and HiDive.