Light Novel / Ascendance of a Bookworm 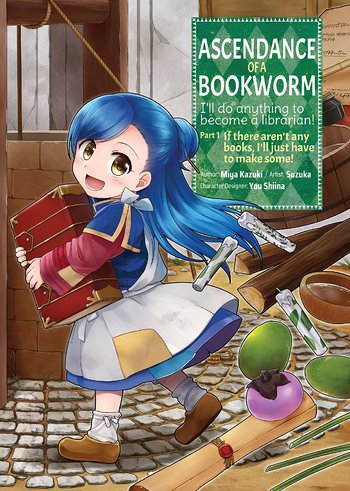 Myne with a book.
Advertisement:

All Urano Motosu has ever wanted to do is read as many books as she possibly can. After she finally manages to become a librarian, her greatest friend suddenly betrays her: During an earthquake, the stacked up books near her fall down and crush her to death. Her dying wish is that she can be reborn and keep reading more books. Well, she gets half of what she wanted: rebirth, but as a poor, illiterate and sickly child named Myne in the medieval period.

Not only is Myne incapable of reading, there's almost no writing to be found. Books are a privilege of the wealthy as they have to be written or copied out painstakingly by hand and only the wealthy could afford such a thing. Fine. If there are no books, then she'll have to make them herself. Unfortunately, paper and ink are also much too expensive to get, meaning she'll have to invent them and anything else she needs. But Myne's read a lot of books in her lifetime, and has been doing crafts since she was a child (the first time around), so she knows what to do, and even how to do it sometimes. But her resources are limited and her knowledge isn't perfect, so that means a lot of trial and error. And a little help would be appreciated, which she gets in the form of a neighbor boy named Lutz.

But her odd knowledge and apparent genius do not go unnoticed. Her rapid inventing and need for materials soon attracts the interests of those above her station. From merchants who seek to profit from her craft, to nobles and religious leaders who wish to exploit her for their own ends.

And there's another problem, too. Remember the part about being sickly? That's important. Not only is Myne weak, tiny and prone to fevers if she exerts herself or is exposed to bad weather, but she's also prone to a mysterious fever that will rampage through her body. A fever that seems tied to how determined she is. It can be kept at bay through sheer willpower, but this "solution" won't work forever. More than the books, if Myne cannot defeat this illness she will truly die once more.

Written by Miya Kazuki, it was originally serialized online

between September 2013 and March 2017 as a free Web-Novel on the website Shōsetsuka ni Narō. It would later be acquired by TO Books, who has published its volumes since January 2015 with illustrations by artist You Shiina. Because of the series popularity it would end up getting a manga adaptation, also published by TO Books, divided in the same number of parts as the novels. Its Part 1 was illustrated by Suzuka, serialized in Comic Corona from October 2015 to July 2018, and compiled into a total of seven volumes. Once finished Suzuka continued to illustrate Part 2, which began serialization in Comic Corona on September 24, 2018 and currently has a total of four volumes. Part 3, which is illustrated by Ryo Namino and currently has three volumes, began serialization in Comic Corona, despite Part 1 still being ongoing at the time, Part 4 is illustrated by Hikaru Katsuki and began its online serialization via Niconico Seiga on December 2020. A Spin-Off manga series, Ascendance of a Bookworm Official Comic Anthology began in 2019. The light novels and the first two parts of the manga adaptations are available in English from J-Novel Club and Bookwalker.

An anime of 14 episodes produced by Ajiado was released in October 2019. A second, 12-episode season aired in Spring 2020, and a third, 10-episode one was part of the Spring 2022 season. As the light novel is divided in Parts of increasing length, both Season 2 and Season 3 were necessary to cover Part 2 material.

Warning: The English translation of the light novel is currently on Part 4, which means that there are things that are taken for granted by light novel readers that will spoil anime-only viewers.

Alternative Title(s): Ascendance Of A Bookworm