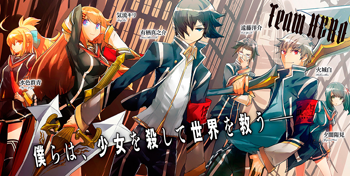 From left to right: Gunjou Mizuiro, Kiri Kiryuu, Shinnosuke Arisu, Yousuke Endou, Shiro Hishiro, Himi Yuuyami.
We will kill the girl and save the world—
Advertisement:

With the rise of the mysterious Labyrinth Disease, the world has changed. All over the world, girls are turning into labyrinths, and so, in order to protect humanity, must be killed before they turn into the Eternal Labyrinths that are gradually swallowing up the land.

Shinnosuke Arisu's younger sister, Saki, was one such girl afflicted by the Labyrinth Disease. As Shinnosuke was unwilling to kill her, she turned into an Eternal Labyrinth—the deadliest one in Japan, nicknamed Apocalypse Alice. Ten years later, after a long journey, Shinnosuke returns to Japan with one goal in mind:

To infiltrate Apocalypse Alice and, no matter how impossible, to save his sister.

Apocalypse Alice (Mokushiroku Arisu) is a light novel series written by Takaya Kagami of The Legend of the Legendary Heroes, Itsuka Tenma no Kuro Usagi, and Seraph of the End fame, illustrated by Yuuki Katou, artist in BlazBlue, and serialized in Fujimi Shobo from 2013.