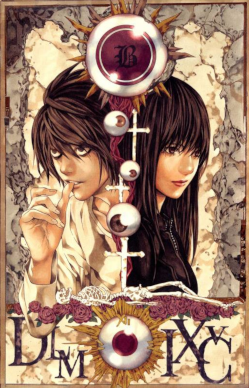 A Spin-Off novel of the popular manga and anime series Death Note, written by NisiOisiN, published in 2006.

Death Note: Another Note: The Los Angeles BB Murder Cases follows FBI Agent Naomi Misora as she is enlisted by the Great Detective L to help him solve a series of perplexing and brutal murders in Los Angeles, each with a Wara Ningyo (a Japanese straw doll) left at the crime. She is soon joined in her investigation by a mysterious "unprivate" detective called Ryuzaki.

Another Note provides examples of the following tropes: