Light Novel / And You Thought There is Never a Girl Online? 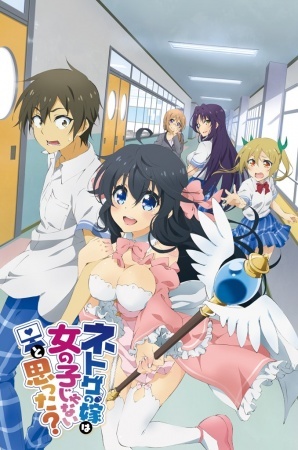 And You Thought There is Never a Girl Online? (ネトゲの嫁は女の子じゃないと思った? / Netoge no Yome wa Onnanoko ja Nai to Omotta?) is a light novel series written by Shibai Kineko and illustrated by Hisasi. ASCII Media Works have published ten volumes since 2013 under the Dengeki Bunko imprint. The manga adaptation, illustrated by Kazui Ishigami, is published by Dengeki G's Comic. Project No. 9 produced an anime adaptation as part of the Spring 2016 Anime block.

Ako appears in the Ignition update of Dengeki Bunko Fighting Climax as a playable character, with Rusian also joining as an assist character.

Hideki Nishimura is an avid gamer playing the MMORPG Legendary Age as the knight "Rusian". One day he confessed his love to a girl online, but she told him she was a guy in real life. After that he swore never to trust a girl online again.

After two years as a freelancer, he has settled into the Alley Cats Guild and, after much persistence, accepted the in-game proposal of the guild's resident cleric, "Ako". When the guild decides to meet up in real life, he is shocked to discover that his in-game wife is a real girl (full name: Ako Tamaki), and a schoolmate to boot, as do his other two "male" guild-mates, classmate/knight Akane "Schwein" Segawa and Student Council President/mage Kyou "Apricot" Goshouin.

Unfortunately for them, Ako has trouble distinguishing between the real and online worlds, so Hideki, Akane and Kyou work together to help her overcome her issues.

Alternative Title(s): Netoge No Yome Wa Onna No Ko Ja Nai To Omotta, And You Thought There Is Never A Girl Online