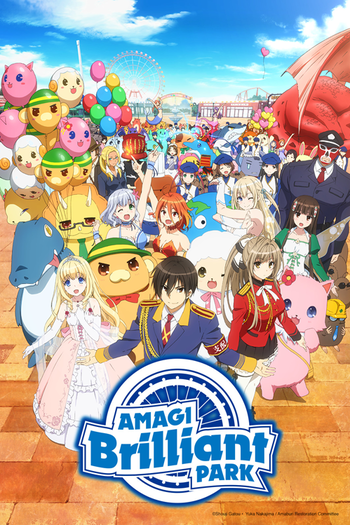 "It's NOT a fairy tale."
— Text on the first page of the Storybook Opening in the anime's OP note Initial release

had "It's not a Fairy Tail ", a statement which is most definitely correct.
Advertisement:

Somewhere in the Kanagawa area lies a magically-themed theme park named Amagi Brilliant Park, a place of wonder and happiness... Only it's anything but. Decrepit and run-down, its rides and attractions are in dire need of maintenance and, what's more, its staff and performers seem to have lost hope that things will become any better. Not exactly a place one would first think about to bring a family to for a weekend of fun and relaxation.

Except it's not just a park. For many of the workers there, it's literally not just the source of their livelihoods, but their very lives. The employees are actually odd fairy folk that hail from a place in another dimension called Mapleland, and have migrated to the real world to continue getting energy from the visitors' happiness. But because the park is doing horribly, they're at risk of slowly fading away in several months.

This is the place high school student Kanie Seiya has to save, before the place is closed down forever. But can he really do it in the time limit he's been given? And more importantly, will the rest of the theme park workers trust him enough to actually get any work done?

Written by Shoji Gatoh (of Full Metal Panic! fame) and illustrated by Yuka Nakajima, Amagi Brilliant Park (甘城ブリリアントパーク) is a light novel series published by Fujimi Shobo under their Fujimi Fantasia Bunko imprint, with eight volumes available as of June 2016. Three manga adaptations have been done of the story as well, all published under Kadokawa Shoten; one of the light novels, one of the anime, and one a yonkoma.

An animated adaptation was produced by Kyoto Animation, covering the first book, and aired a total of 13 episodes between October 6, 2014 and December 25, 2014. The series was directed by Yasuhiro Takemoto, with Fumihiko Shimo serving as series composer, Miku Kadowaki serving as character designer, and Nobuaki Maruki serving as chief animation director.

It was licensed for North America by Sentai Filmworks on April 7, 2015. Crunchyroll has obtained streaming rights for the show in the US and Canada, and may be watched here

for viewers living in those areas.

8 volumes of the light novel have been published. J Novel Club licensed the series for English translation and began releasing them digitally in September 2018, and have caught up with all Japanese volumes as of November 2019.

This series shows examples of the following: