Light Novel / All You Need is Kill 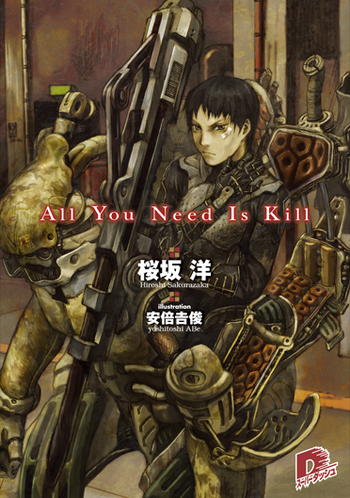 "Is it true the green tea they serve in Japan at the end of your meal comes free?"
— Rita "Valkyrie" Vrataski, aka "The Full Metal Bitch"
Advertisement:

There's one thing worse than dying; it's coming back to do it again and again. When the alien Mimics invade, Keiji Kiriya is just one of many raw recruits shoved into a suit of battle armor and sent out to kill. Keiji dies on the battlefield, only to find himself reborn each morning to fight and die again and again. Just before his first death though, he gets to meet with a legendary soldier: Rita Vrataski, the "Full Metal Bitch", whom he will try to imitate and learn from in every iteration. Is the Bitch the key to Keiji's escape, or to his final death?

All You Need Is Kill is a 2004 Japanese novel by Hiroshi Sakurazaka that deals with Keiji's "Groundhog Day" Loop and his desperate efforts to break the cycle.

In 2014, it was loosely adapted into a film called Edge of Tomorrow, directed by Doug Liman, produced by Warner Bros., and starring Tom Cruise as "William Cage" and Emily Blunt as Rita Vrataski.

There is also a two-volume manga adaptation illustrated by Takeshi Obata, with an omnibus release in 2016.

In May 2014, Sakaurazaka revealed he was working on a sequel.

Tropes in this work