Light Novel / Alderamin on the Sky 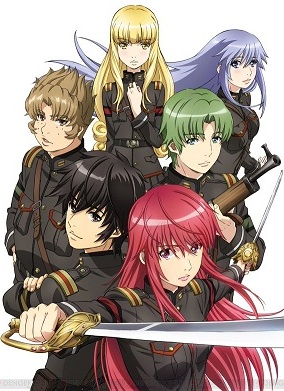 In a World… where everyone is partnered with a small elemental spirit, the Katvarna Empire wages an unending war with the neighboring Republic of Kioka. The 17-years old Yatorishino Igsem, the scion of the most loyal to the Imperial House noble family, is about to embark on a ship in order to take the High Grade Military Officer Exam. Accompanying her is Ikta Solork - a lazy, loudmouthed lecher. Despite being an complete opposite to the diligent and noble Yatori, they form an unbeatable duo, as under his coarse face, Ikta hides the mind of a tactical genius... though he hates war and wants nothing more than to land a cozy job as a librarian. Due to certain circumstances, however, he grudgingly also aims to take the exam alongside his friend.

On the cruise heading towards the examination site, they meet three other test takers - the handsome but modest Torway Remeon, ambitious Matthew Tetdrich, and aspiring medic Haroma Bekker. They don't get to mingle for long, as their ship is hit by a raging storm. While evacuating, Ikta spots a young girl being thrown overboard by the waves. He jumps into the sea to rescue her and bring her back to the lifeboat. The 6 of them are left stranded, but that's not the worst of it - they quickly figure out that they landed behind the Kioka's borders and the girl Ikta risked his life to save? She's Chamille Kitra Katjvanmaninik, Katvarna's 3rd princess, making this whole situation that much more complicated.

At this time, no one could've predicted that this would trigger a series of events with would force Ikta to survive in a world engulfed in war with his superior intellect... and, in turn, earn his place in the Katvarna Empire's history as the legendary "Lazy Invincible General".

Alderamin on the Sky (org. Nejimaki Seirei Senki - Tenkyou no Alderamin)(ねじ巻き精霊戦記 天鏡のアルデラミン) is a 14-volume Light Novel series written by Uno Bokuto and published by ASCII Media Works under their Dengeki Bunko label from June 2012 to August 2018. The series took the 2nd spot in "This Light Novel is Amazing 2014" contest. A 7 volume Manga adaptation by Kawakami Taiki was serialized in ASCII Media Works' seinen manga magazine Dengeki Maoh. An Anime adaptation produced by studio Madhouse also aired in July of 2016. The series is available for worldwide streaming on Crunchyroll

See also Reign of the Seven Spellblades by the same author.

Alderamin in the Sky contains examples of: