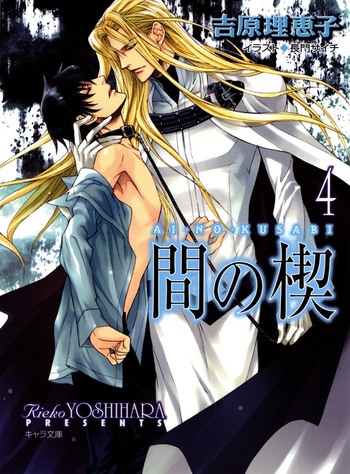 Ai no Kusabi is a Japanese novel written by Rieko Yoshihara. Originally serialized in the yaoi magazine Shousetsu June between December 1986 and October 1987, the story was collected into a hardbound novel that was released in Japan in 1990.

The story takes place on the planet Amoi, ruled by a computer called Jupiter, which has imposed a number of strict social rules on its population. The Elites, humans that are genetically engineered by Jupiter, occupy the capital city of Tanagura and travel to the pleasure city of Midas, which has a slum called Ceres. They are ranked amongst themselves by hair color with the Blondies being the highest. Under Jupiter's restrictions, the Elites are all sterile and forbidden from indulging in sexual activities. Blondies and other elites keep "Pets" (adolescents) purely for voyeuristic purposes and they are kept for about a year before being discarded. Further emasculation is seen in the "Furniture," adolescent boys (that were all once mongrels) who serve the Blondies.

Iason Mink, a high-class Blondy, runs into Riki, an unusual black-haired Mongrel, makes him his "Pet" which Riki resents being. As Riki learns of the dangers Iason faces by keeping him, he finds himself developing feelings for his master. Focusing on the relationship between Iason and Riki, Ai no Kusabi also explores issues of caste systems and social exclusion.

The novel was partially adapted into a two-episode anime OVA by Anime International Company, the first episode released in August 1992, and the second in May 1994. In November 1993, an audio drama entitled Dark Erogenous was released focusing on a time period left unexplored in the original novels. A new anime OVA adaptation, also from AIC, was scheduled to begin releasing in Japan in 2009 but it was delayed due to financial problems. The first OVA of four announced for the remake titled Ai no Kusabi ~ petere Kanju ~ was released on Jan 18, 2012. The second OVA ~ pardo Setsuyoku ~ was released on Feb 15, 2012 with volume 3: ~ congressus Kaiko ~ released on March 21st and the last announced volume 4: ~ retino Inbaku~ on April 18th.

The 2012 OVA series has been licensed by Media Blasters and released in April 2013 in the US.