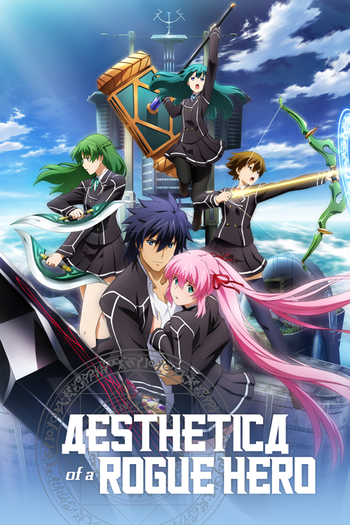 Akatsuki Ousawa returns to Earth from another world after defeating the Demon King Garius. He brings along the busty, pink-haired Miu, Garius' daughter whom he entrusted to Akatsuki with his dying breath. They're forced to attend the Japan branch of BABEL, a high school for teens returning from other worlds and their special powers. Akatsuki passes Miu off as his sister and they go through the difficulties of adapting back to Earth life while threats and ominous shadow organizations from Earth and other worlds hound their every footstep.

An animated adaptation aired during the Summer 2012 Season. Later it was released by Funimation in December 2013 under the name Aesthetica of a Rogue Hero. There is also a manga adaptation entitled Hagure Yuusha no Kichiku Bigaku or, literally, A Maverick Hero's Brutish Aesthetics.