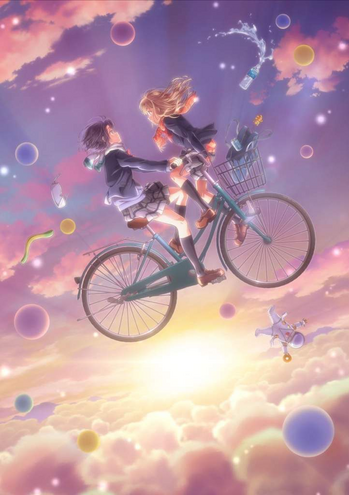 E.T. go home.
The second floor of the gym. That’s our spot. Class is in session right now, but they don’t hold class in a place like this. This is where Shimamura and I became friends. What is this feeling? Yesterday, I dreamed of kissing her. I’m not like that, and I’m sure Shimamura isn’t either. But… when Shimamura thinks of the word "friend”, I want to be the first thing that comes to her mind. That’s all.
Advertisement:

Adachi is skipping class when she first meets fellow truant Shimamura in the gym loft, and just like that, a friendship is born. Except now Adachi’s having dreams about kissing her, and she doesn’t know what that means, but she’s pretty sure it’s not something you do with a friend. What are these strange feelings she has when she thinks of Shimamura? And is it possible Shimamura feels the same way?

Adachi and Shimamura is a Japanese Yuri Light Novel series written by Hitoma Iruma (Ground Control to Psychoelectric Girl, Regarding Saeki Sayaka) and illustrated by Non, which began serialization in October 2012 in ASCII Media Works' Dengeki Bunko Magazine. The light novels are licensed for English release in North America by Seven Seas Entertainment. Nine volumes are currently out. The series has been adapted into two manga series, and an anime adaption directed by Satoshi Kuwabara and Tezuka Production began airing in October 2020.

Adachi and Shimamura provides examples of: