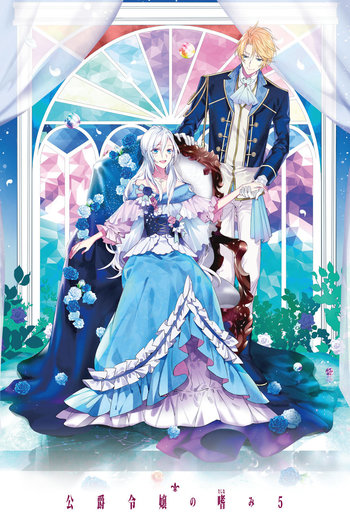 Out of the blue, Iris Lana Armelia suddenly awakens to the memories of her previous life as a Japanese accountant who distracted herself from her lack of love and family by playing otome games. And Iris? She was the villainous rival of an otome game who interfered with the relationship of the young baroness Yuuri and prince Edward. A little too late, it turns out, because she's already in the middle of the downfall scene, cast aside by her own cheating fiancee and brother in front of a large group of nobles. Quickly gathering her wits about her, she courts the sympathy of the surrounding crowd by expressing her shock at the prince's adultery and retreats with as much dignity and grace as possible.

She then travels to see her father, the prime minister Duke Armelia. While at first he is inclined to send her to a monastery for the rest of her life, her quick appraisal of the situation that brought her here and her clear intelligence changes his mind. Instead, he "punishes" her by sending her into "exile" in the family manor in Armelia. It'd be a shame to put her abilities to waste, though, wouldn't it? While she's there she can act as the fief lord.

This allows Iris to put her old life's abilities to good use. Tax reform. Luxury items. Social programs. Anything it takes to bring power and prestige to house Armelia. However, even as she establishes a new company, Yuuri and Edward's group don't seem inclined to just let her retire and keep to herself.

The English adaptation of the manga is licensed by Seven Seas Entertainment, who is also set to bring over the light novels. The original Japanese manga can be found here

and the original novel can be found here

Accomplishments Tropes of the Duke's Daughter includes examples of: