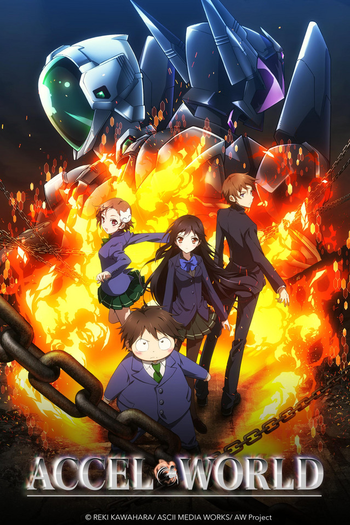 Burst Link!
"What if you could escape to an accelerated world?"
Advertisement:

Faced with a Gang of Bullies in a chubby body, Haruyuki Arita, a shy seventh-grade teenager at Umesato Junior High School, finds escape from reality into a cyberspace world maintained by the school. He loses himself in a virtual squash game no one else plays and holds all of its high scores. Until the day he finds his own scores topped by somebody else by a considerable amount of points.

This sets up Haruyuki into an encounter with "Kuroyukihime", an enigmatic eighth-grader, School Idol and the Student Council Vice-President of Umesato Junior High — the girl who topped his squash scores — and offers him the opportunity to learn how to "accelerate to a faster world". The "Brain Burst" program, downloaded directly to a neuro-link attached to the bottom of the skull, allows a person to make time appear to stand still by "accelerating" their brainwaves; this can often be used as Hyper-Awareness, letting its users make decisions and strategies in seconds that normally take minutes. Unfortunately, there is a limit to how many times a person can accelerate. People with Brain Burst take Burst Points (BP) needed for acceleration from others by winning in a Fighting Game. The only way to avoid being challenged is to not be connected to the same network, which, in a world where constant network connection is the norm, requires being very careful and a lot of willpower.

Once in the game, Haruyuki turns into Silver Crow, and, in gratitude for bringing him into this world, decides to use his abilities to complete Kuroyukihime's goal: reach Level 10 of Brain Burst to meet its creator and discover its true purpose. The catch is that this requires defeating the current leaders of the game: six other Level 9 players (aside from Kuroyukihime) who have led the world for over two years and will do anything to maintain the status quo because one loss at Level 9 means Brain Burst will permanently uninstall itself from the loser, while reaching the endgame at Level 10 could potentially cause all players to lose Brain Burst forever.

Accel World is an ongoing 2009 Light Novel series written by Sword Art Online creator Reki Kawahara, published by ASCII Media Works and serialized in Dengeki Bunko, with illustrations by HiMA. It has a manga adaptation, illustrated by Hiroyuki Aigamo, in print since 2010, as well as two spinoffs: Axel World, a 2010 yonkoma series illustrated by Ryuryuu Akari, and Accel World / Dural: Magisa Garden, a 2012 story illustrated by Ayato Sasakura focusing on the younger sister of a deceased member of Kuroyukihime's guild, Nega Nebulus.

A 2-cour anime adaptation produced by Sunrise aired during the Spring 2012 Anime season and has been licensed for streaming by Viz Media.

The light novels and manga adaptation have been licensed by Yen Press for a Western release. While the first couple of light novels have earned a very mixed response from American critics as for the Japanese, the series has attained much more positive attention from them over time.

Kuroyukihime was chosen to represent Accel World in the crossover Fighting Game Dengeki Bunko: Fighting Climax by Sega, where she uses her avatar from the game world; Haruyuki was chosen as one of the support characters.

Example of:
Mistaken for Gay