Light Novel / A Sister's All You Need 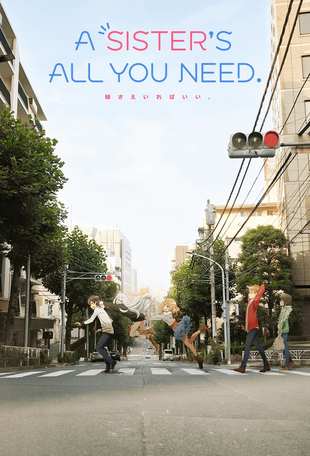 A Sister's All You Need (妹さえいればいい。, Imōto Sae Ireba Ii.) is a Japanese light novel series written by Yomi Hirasaka (who previously wrote Haganai) and illustrated by Kantoku. Shogakukan has published 13 novels since March 2015 under their Gagaga Bunko imprint. Two manga adaptations have been published by Shogakukan and Square Enix. An anime television series adaptation by SILVER LINK. premiered on October 8, 2017.

The story follows the novelist Itsuki Hashima who is surrounded by various people, including a beautiful genius writer who loves him, a big-sisterly college classmate, a fellow male writer, a sadistic tax accountant, and his editor. As the story progresses, the underlying conflicts of dreams and goals surface, as each character attempts to achieve their dreams, in their own way. One such example is the rivalry between author Itsuki and his friend Haruto. Itsuki's stories are driven by a passion for stories about little sisters with praise from a selective yet strongly supportive fan-base, whereas Haruto's stories are given by victory and romance through more common, yet popular cliches. Each of their stories are riddled with common light novel themes and concepts, such as romantic comedy elements and erotic illustrations. They are all looked after by Itsuki's younger "brother" Chihiro, who in fact is his younger step sister.

A Sister's All You Need provides examples of: