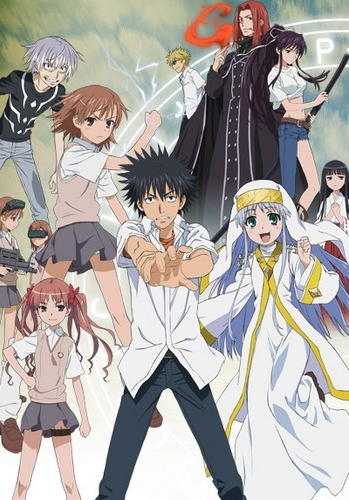 Touma Kamijou is an Ordinary High-School Student living in Academy City, a state-of-the-art city dedicated to the scientific study of humans with Psychic Powers. Every single student is given an "Esper Rank" to indicate their power, and Touma is the lowest of the low: a Level 0 with no psychic talent whatsoever. The only thing he has going for him is his right hand: the Imagine Breaker, which has the ability to dispel any and all supernatural phenomena but also negates his own luck.

His misfortune filled existence in Academy City takes a turn for the worse when a strange nun ends up on his apartment balcony: Index, a girl with the contents of over 103,000 forbidden magical grimoires locked away in her memories. She's on the run from a secret sect of sorcerers who want the information in her head, and drags Touma into the conflict between the magical and scientific factions of Academy City as well.

A Certain Magical Index (Toaru Majutsu no Index) is a series of Light Novels written by Kazuma Kamachi and published by Dengeki Bunko which began in 2004. The first series of novels has been completed with 22 main volumes and two short story volumes, and its followup, New Testament (Shinyaku Toaru Majutsu no Index) is complete with 23 volumes. The third series, Genesis Testament (Souyaku Toaru Majutsu no Index) began on February 2020. Along with the novels, there is a media franchise consisting of side stories, anime and manga adaptations, games, and spin-offs that headline some of the series's Ensemble Darkhorses.

As of this writingnote July 2021 the Index series consists of the following:

A Certain Magical Index has also been featured in various crossovers, usually with other Light Novel series that have the same the publisher, Dengeki Bunko.

Crossovers
Since there are still novels which are yet to be adapted into anime, please tread carefully, lest you get spoilers for future seasons.