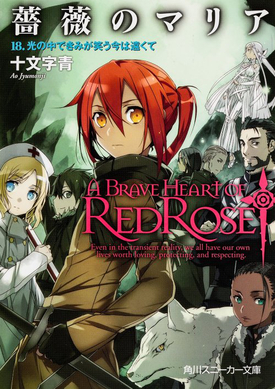 A Brave Heart of Red Rose (Bara no Maria) is a Light Novel series written by Ao Jyumonji and illustrated by BUNBUN. The series follows Mariarose, a red-haired warrior who works as a "Cracker", a mercenary, in the city of Elden where their fellow companions try to earn money while they deal with weird and crazy people. One of the Running Gags of this series is Mariarose's gender. Despite the female name, Mariarose's gender has never been confirmed in the series and it doesn't help Mariarose displays both typical boyish and girlish reactions and attitudes.
Advertisement:

Important Note: Unless Word of God confirms it, Mariarose's gender should be left ambiguous so the singular "they" should be used in examples.