"Hey what's happening, everyone. This is Yamimash here." 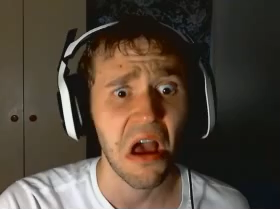 Yes, this is his usual expression.
Advertisement:

or Yami, is a British gamer who does Let's Play videos on YouTube. His channel predominately features playthroughs of Survival Horror games, such as Slender, Penumbra, Amnesia: The Dark Descent, though his channel does feature non-horror games, such as Pokémon, Super Meat Boy, Minecraft and Garry's Mod. He is good friends with various big let’s players, such as Markiplier and Mangaminx. Yamimash is known to be one of the more laid back and friendly Let's Players, a big pokemon fan and is often easily frightened.

Yamimash has currently reached over one million subscribers.