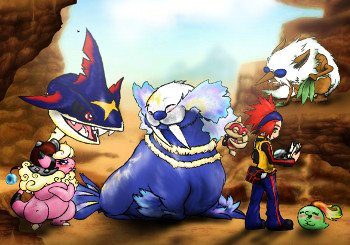 Best Friends in the Post-Apocalypse
Source

Twitch Plays Pokémon (TPP) is a social experiment in which commands representing buttons on an original Gamecube controller (up, down, left, right, A, B, X, Y, L, R, Z, start, control stick, and c stick) are entered into a chat on Twitch, and then translated into a game of Pokémon XD via an IRC bot. In short, hundreds of people fighting over a controller. Throughout its life, Twitch Plays Pokémon has spawned hilarious characters, memorable moments, and even a religion.

Twitch Plays Pokemon XD, the fifth and final run of "Season 2", returns the mob to the desert region of Orre five years after their previous adventure, where a brand new threat has appeared.

The run was revealed in a surprise announcement at the end of Colosseum, and began on December 12th, 2015.