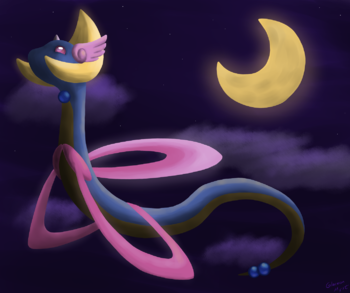 "Man this Wingull is strong. And it is a bird, that has arms, that punches things with fire. Ah, it feels so good to be back in craziness of the randomized world..."
— Live Updater for Twitch Plays Pokémon White 2
Advertisement:

Twitch Plays Pokémon (TPP) is a series of social experiments in which commands representing buttons on an original Nintendo DS (up, down, left, right, A, B, X, Y, L, R, start, and select) and touchscreen coordinates are entered into a chat on Twitch, and then translated into a game of Pokémon via an IRC bot. In short, hundreds of people are fighting over a controller. Throughout its life, Twitch Plays Pokémon has spawned hilarious characters, memorable moments, and even a few religions.

Twitch Plays Pokémon White 2 is the third run of Season 4, which began on on June 3rd, 2017, and ended on June 20th, 2017. It is the fifth randomized run overall, meaning Pokémon, movesets, abilities, Trainer classes, and non-plot-related items are shuffled around; on top of that, Trainer names are drawn from the Top 300 players of the last Twitch Plays Pokémon: Arena leaderboard, similar to how Trainers in Twitch Plays Pokémon Chatty Yellow were named after players from the chat. Randomized evolution also return from Alpha Sapphire and Randomized Platinum, although in a manner that prevents them from skipping evolution stages (e.g. Turtwig can evolve into Charmander or Charmeleon, but not into Charizard).

The protagonist for this run is named AAAALK', often interpreted as "Dr. Alk" or "Dr. Alek" due to the "Trainer" clas being randomized into the "Doctor" class. The shuffling or Trainer classes also caused members of many other organizations to appear alognside Team Plasma throughout the game, namely Team Rocket, Team Magma, Team Skull, Team Snagem, Team Fusion, and Team Valor; several major characters also appear to have joined said organizations, with the "Gym Leader" class turning into "Burglar", "Elite Four" into "Snagem Heads", and "Subway Boss" into "Rocket Grunt". As a result of those class changes, two recurrent plot points in the run's lore involved Unova falling victim to both a mutagen epidemic and a criminal turf war.