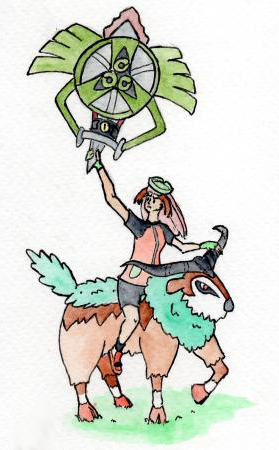 Armed with the ghost... of a ghost... that kills things. Source "Acapella Rides into Battle!" by Liria10

User A: I have not really had the time to participate in this run as much as I’d have liked. What’s the lore been like?
User B: I'm gonna mash together a bunch of lore from a bunch of different people. First things first. Hamsters.
— Reddit thread

Twitch Plays Pokémon Theta Emerald EX is the fifth run of Season 4, and the twenty-sixth run overall, beginning September 30th, 2017 and ending on October 15th, 2017. The game featured in this run, Pokémon Theta Emerald EX, is an extensive hack of Pokémon Emerald created by LCCoolJ95 , featuring all Pokémon up to Generation VI and many later-gen mechanics, including Fairy-type, Mega-Evolution, and a Physical/Special split. This particular run was notably picked through a community poll after Pyrite proved to be a divisive choice, something that would become commonplace in future seasons.

The Host for this run is a girl named ACCPPQ (often interpreted as "Acacia" or "Acapella"), who followed the previously established trend of Hoenn-based Hosts picking Torchic as their starter; she was also seen by many as a spoiled-rich girl due to starting the game with 50,000P, although she quickly lost half of it to a wild Wingull and spent the rest of it on Poké Balls. Other notable characters included a fabulous Mega-Evolving Ampharos, an Aegislash thought to be wielded by ACCPPQ herself, an overpowered Gogoat nicknamed "Holly" that served as figurehead of the team, and a Sylveon that stole the show after a glitch made the villain from Hamtaro: Ham-Ham Heartbreak appear all over its battle interface.