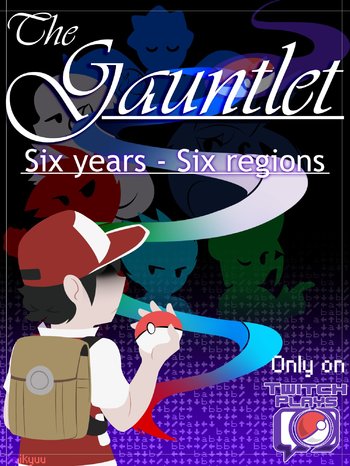 for Twitch Plays Pokémon: The Gauntlet

Twitch Plays Pokémon (TPP) is a series of social experiments in which commands representing buttons on an original Game Boy, Game Boy Advance, Nintendo DS, and Nintendo 3DS (up, down, left, right, A, B, X, Y, L, R, start, and select) are entered into a chat on Twitch, and then translated into a game of Pokémon via an IRC bot. In short, hundreds of people are fighting over a controller. Throughout its life, Twitch Plays Pokémon has spawned hilarious characters, memorable moments, and even a few religions.

Twitch Plays Pokémon: The Gauntlet, officially stylized as 𝕿𝖍𝖊 𝕲𝖆𝖚𝖓𝖙𝖑𝖊𝖙, encompasses the first six runs of Season 7, marking the sixth anniversary of Twitch Plays Pokémon. It consists in a succession of six games that were played during Season 1, namely Pokémon Red, Pokémon Crystal, Pokémon Emerald, Pokémon Platinum, Pokémon Black 2, and Pokémon X. The ROM files played are identical to the ones from the first season, including the Crystal 251 hack of Crystal and the Blaze Black 2 hack of Black 2; some additional quirks are however added through external scripts, such as encountering previously released Pokémon or adding some new Legacy Boss Battles. During each game, a timer at the bottom of the screen indicates how the Gauntlet run compares to the original.

Intermissions games are run in-between each run of The Gauntlet, most notably "Roulettes" that hop randomly between an entire library of games from a specific console, with players able to vote to either stay on the current game or switch to the next one. Longer intermissions were also featured, including a revisit of Touhoumon; tropes for the latter are listed on the original run page.