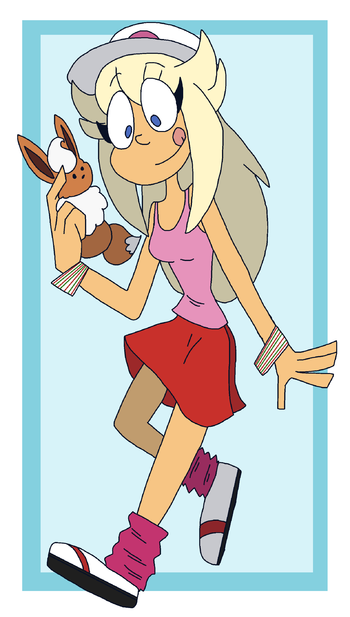 "When traveling through Sweet Land, remember to remain in control of your appetite at all times."
Source "PokeSweet trainer Paula" by PikaPikaSaki

Deadinsky665: Why did we have to name a bunny vore?
Trollkitten: Not sure if better or worse than what we named the Poliwag.
— Comments

Twitch Plays Pokémon Sweet is one of the side-games played during Arena intermissions, using the "full democracy" system in which players get to vote on a single input in-between every Arena match. The game featured, Pokémon Sweet, is a hack of Pokémon FireRed taking place in a "dessertified" Kanto, in which Pokémon have been replaced with PokéSweets, such as Squirpie, Meowffin, or Mintanyte. It also features an alternate type chart as a result, composed of 12 pastry-related types : Vanilla, Cherry, Strawberry, Apple, Orange, Banana, Lemon, Lime, Blueberry, Grape, Raspberry, and Chocolate.

Pokémon Sweet began on May 4th, 2018, replacing the previous sidegame Bootleg Green, and kept running for the remainder of Season 5 (aside from a two-week long Halloween-special intermission, during which the featured sidegame was the creepypasta-based Hypno's Lullaby instead). It came to an end on February 10th, 2019, right before the start of Season 6, and was then replaced by the SpaceWorld 1997 Demo of Pokémon Gold and Silver.

As a side-note, the game's sequel, Pokémon Sweet 2th, was originally considered for a main Season 5 run, but those plans were scrapped due to the hack not being stable enough.

for archived progress of the game in screenshot form.