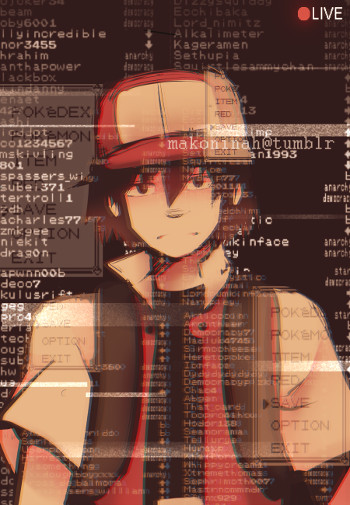 . Used with permission.
Red: The voices tell me the future. I will lay to rest the restless spirits. I will destroy you and your organization. I will climb to the peak of this land, with all the Badges and accolades it has to offer. And then...
Giovanni: (thinking) He's insane...
Red: THERE WILL BE SILENCE!
~Twitch Plays Pokemon: Dreams (Part 2)

Twitch Plays Pokémon (TPP) is a social experiment in which commands representing buttons on an original Game Boy (up, down, left, right, A, B, start, and select) are entered into a chat on Twitch, and then translated into a game of Pokémon Red via an IRC bot. In short, over 100,000 people are fighting over a controller. Throughout its life, Twitch Plays Pokémon has spawned hilarious characters, memorable moments, and even a few religions.

Originally the game operated on a simple basis: any player could enter any command in chat and the command would go through for Red to follow. As the stream worked on a 20-second delay, this caused any task requiring the most minimum of finesse to become a herculean feat. No section demonstrated this more than Route 9

, a simple ledge maze that bamboozled the players for fifteen hours.

As time went by, the frazzled and confused Red discovered religion in the form of the Helix Fossil: a Plot Coupon that could be "used" (to no effect) but crucially could not be discarded or consumed. Thus, it was accidentally "used" to a ridiculous degree and "CONSULT THE HELIX FOSSIL" became a meme; and eventually, a god. Subsequently, the over-leveled Pidgeot on Red's team became "Bird Jesus" and "The Only Hope" when every other viable Pokémon (including the starter!) was accidentally released.

TPP's popularity eventually grew to the point (topping out at 123,000 over one million simultaneous players) where even the most simple hurdles became impossible to pass with so many conflicting commands being entered. After Red became trapped for more than twenty-four hours within the Team Rocket Hideout

(and its nefarious floor-tile puzzle), a new system was created: players would vote for commands every five seconds and the most popular command would be chosen as the input.

This made the precision moves necessary to progress possible, but many players felt this was a betrayal of what made TPP unique and fun, as basically now what players were left with was just normal gameplay, but much slower. This led to players protesting the move by spamming votes for the "start" button, keeping the game permanently paused and making all progress impossible. This prompted another rethink and a new system was made: the Anarchy-Democracy System. In addition to command inputs, players could vote for when they wanted the game to be played by voting and when they wanted it to be a free-for-all as it was originally.

At 16 days, 7 hours and 45 minutes, Red and his team of Zapdos, Nidoking, Venomoth, Lapras, Omastar and Pidgeot completed their mission, and became champions of the Pokémon League. They returned home to Pallet Town, and although the mob kept inputting its commands, Red was freed from the burden of having to obey them. He spent a long, quiet moment standing in front of his home, unmoving, stunned from sheer relief. The Mob thus exited his mind and left him for good... until the second run where they sparred off against Red and his team atop Mt. Silver, now controlling the mind of another trainer from Pokémon Crystal.

Come April 2016, in the lead up PBR 2.0's debut, several older run saves were played. Red was the fourth and final of these, following FireRed, Emerald and Crystal, over 2 years after it's end.

The official stream could be found here

. The stream has a fan-made Game Intro

. A two-minute long dramatic summary can be found here

A note when adding examples: Every Memetic Mutation adopted by enough people ascends to canon. In fact, the whole TPP universe is composed of Ascended Memes.

Since no one is going to watch the 255+ hours necessary to get caught up, all spoilers will be unmarked.