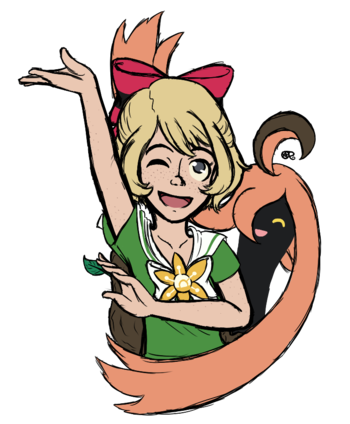 "Oh hey, this looks a lot like a photo I have... But that was taken 266 years ago." Source Venus and her starter by Ostara

"The forest is full of Kabuto, now the flower beds are full of Omanyte? That know STEAM ERUPTION? What the heck is with this randomizer?"
— Comment on the run's discussion thread

Twitch Plays Pokémon Randomized Y is the fourth run of Season 5 and the sixth randomized run overall, which began on August 11th, 2018 and ended on August 26th, 2018. Said run features a randomized version of Pokémon Y, following the now-established tradition of having one randomized run per season. It particularly marks the first return to Kalos since Twitch Plays Pokémon X, and the first Generation VI game to be played on stream since Twitch Plays Pokémon Alpha Sapphire. Unlike the latter however, Randomized Y allows Trainers to be randomized into "unique" classes, meaning that any overworld Trainer can potentially turn out to be a Gym Leader, a Battle Chatelaine, or even a high-ranked member of Team Flare.

"); this is notably the first time a female character was picked in a game featuring Character Customization, which the chat took great advantage of by having her wear over a dozen different outfits over the course of the run. This isn't to say that her adventure wasn't an eventful one, especially as it turned out that most major characters ended up joining Team Flare as a result of the randomization.