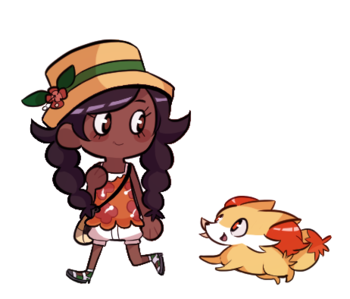 Pictured above, VRG and her starter Litten. Hey, wait a minute...
Source "Virginia is my favorite of the recent hosts" by jellosaur2

"You thought Randomized Colosseum was the randomized run for the season, but it was I, badge machine!"
— Discussion Thread

for the pre-run intermission

Twitch Plays Pokémon Randomized Ultra Moon, often abbreviated as "RUM", is the sixth run of Season 6, which began on October 12th, 2019, and ended on October 23rd, 2019. It is the eighth randomized run overall, and makes Season 6 the first season to feature two randomized runs since Season 1. On top of the usual randomization of wild encounters, movesets, opponents, and evolutions, Randomized Ultra Moon also randomizes character dialogue, meaning any line may be used anywhere in the game. The result is a nonsensical story filled with characters that keep changing names, Pokémon that talk, and a constant stream of non sequiturs that the chat desperately attempts to make sense of.

The Host for this run is a dark-skinned girl named "VRG", finally breaking the streak of picking white-skinned boys in Alola-based games; due to the line "I do" popping up during their first encounter, it was quickly assumed that she and Lillie married each other early in the game. Most of the lore ended up all over the place, as other events caused by the randomization included (but weren't limited to) characters joining the ranks of various villainous teams (including Game Freak), others being either overly present or never seen at all, and "boss" Pokémon being swapped for others, with the fearsome Necrozma notably turning into a fluffy Whimsicott.

for the archived status of the run. A transcript of the run's dialogue can also be found here