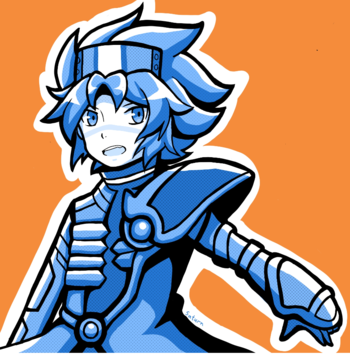 Twitch Plays Pokémon (TPP) a series of social experiments in which commands representing buttons on an original Nintendo GameCube (up, down, left, right, A, B, X, Y, Z, L, R, start, and C-stick) are entered into a chat on Twitch, and then translated into a game of Pokémon via an IRC bot. In short, hundreds of people are fighting over a controller. Throughout its life, Twitch Plays Pokémon has spawned hilarious characters, memorable moments, and even a few religions.

Twitch Plays Pokémon Randomized Colosseum is the third run of Season 6, which ran from June 8th, 2019, to June 15th, 2019. It is the seventh randomized run and the thirty-sixth run overall, as well as the first return to the GameCube games since the Colosseum and XD runs in Season 2. As is par for the course for randomizer runs, all Pokémon (catchable or not), their movesets, abilities, held items, and even evolutions are shuffled around. On top of that, several changes have been included by the developers, including the addition of the Physical/Special split introduced in Genration IV, a 20% buff to all Trainers, replacing trade evolutions by level-up ones, and swapping the "Release" button for a "Hug" button.

This run follows the adventures of ACCC ("Ace"), his companion D QZ" 3 ("Dairy Queen"), and his two starters Nosepass and Persian, as they set out to snag all 48 Shadow Pokémon, and put an end to Team Snagem and Cipher nefarious plans. Notable events along the way involved attempting to snag a Shadow Ho-Oh for almost the entirety of the first day and a half, to battling (and failing to defeat) a doppelgänger with a very familiar team, to just watching the news over and over and over.

The team featured some surprisingly good combos: a Slaking with Pure Power instead of Truantnote for the less Pokémon-savvy out there, this means that instead of its insanely high 160 Attack stat being nerfed by only being able to attack once every two turns, it was actually doubled, a Walrein which combined Natural Cure and Dragon Dance with Baton Passnote using Baton Pass to switch out activates Natural Cure, which cures it of any permanent status effect, and passes down the stat boost of Dragon Dance to the next Pokémon, and Persian itself boosting Synthesis through its Drought abilitynote Drought automatically triggers a sunny weather, which makes Synthesis heal 2/3 of the HP instead of 1/2. Of course, it also had its fair amount of silliness, from an Octillery knowing the mistranslated move Solid Plant, to a Ho-Oh and a Celebi which both used and abused the move Metronome, to Nosepass just plain healing the opponent using Pain Split.