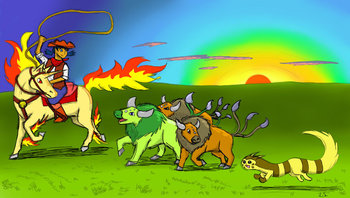 "My name... It's been so long, I've forgotten my real name. The voices... they purged me, gave me a new one, that everybody, even me, seems to know how to pronounce on instinct. EWWYPPP."
— EWWYPP, Memoirs of Host No. 25

Twitch Plays Pokémon Pyrite is the fourth run of Season 4, which began on on August 12th, 2017, and ended on August 27th, 2017. The game used for this run, Pokémon Pyrite, is a hack of Pokémon Crystal that mainly aims to make the game more challenging. Changes include the inability to switch Pokémon or use healing items in the middle of a battle, re-balanced learnsets and growth rates, an improved AI, and a level cap that prevents Pokémon from growing past a certain level until the next badge has been acquired. As a result, Pokémon Pyrite ended up becoming one of the hardest challenges TPP ever had to overcome.

Due to her name "EWWYPPP" being read as "eeeyup" and her dedication to take care of a sick Miltank, the Host of this run is most often depicted as a rancher cowgirl, taking care of cattle and bare-handedly taming wild Pokémon. Her journey through Johto and Kanto ended with what became the Signature Scene of the run: a battle against Azure from Twitch Plays Pokémon Crystal Anniversary, which turned out so challenging that said opponent became the first (and so far only one) that TPP was unable to defeat without the help of Democracy.

This was a free session sponsored by www.tvtropes.com

◊.
TV Tropes sessions are free of charge for personal use.
We thank you for playing fair!