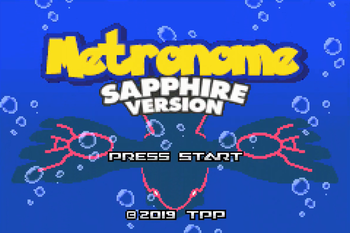 Likely the most skill-based run in TPP history.
"According to our scientific data analysis (based on your feedback), challenge and skill are the most important aspects of TPP. We had a computer watch 10,000 PBR token matches and synthesized it into something that EVERYONE will love."
— Announcement

Twitch Plays Pokémon Metronome Sapphire is one of the side-game runs played during Arena intermissions. The game featured, Pokémon Metronome Sapphire, is a joke hack of Pokémon Sapphire created specifically for the occasion by the TPP development team. Not only is the species of every Pokémon encountered completely random, all of them are set to be at level 100, and only know the move Metronome. Said hack is also notable for being the very first Generation III assembly hack created by the team and played on stream.

The game debuted as a special April Fools intermission, which ran from March 31st, 2019 to April 3rd, 2019. It then returned as an Arena side-game, thus being played using the "full democracy" system in which players get to vote on a single input between each match. Marina, the Host of this run, actually managed to reach the Hall of Fame as soon as April 2nd, then reached it a second time after the game switched to the side-game format. It kept running until the pre-intermission for Twitch Plays Pokémon Sword began on November 21st, 2019; after the run ended, it was finally replaced by a new side-game, Pokémon Navy Blue. It returned briefly in its original intermission format from December 14th, 2019 to December 19th, 2019, allowing Marina to finally catch Meltan and Melmetal.

A Metronome Ruby intermission later interrupted Twitch Plays Pokémon Gauntlet Platinum on April 1st, 2020. It had a boy named SS as its Host, and featured a very screwed up interface displaying erroneous sprites, misinformed types, and unintelligible moves and abilities. It was played in Turbo Anarchy until the first badge was obtained, and ended when the second was acquired.

for archived progress of the game in screenshot form. The game has also been released in the form of a BSP patch file, which can be downloaded here