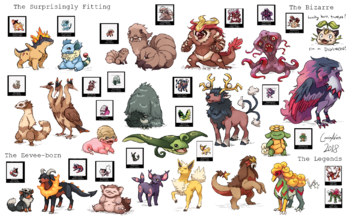 "Encounter brand new Pokémon formed out of two familiar species! Explore and discover your own path through a wintery Johto and Kanto! And if you get lost, don't worry. We've brought along an old friend to help."
— Blurb on the repository of Pokémon Fused Crystal
Advertisement:

Twitch Plays Pokémon Fused Crystal is the sixth and final run of Season 5; it began on December 4th, 2018, and ended on December 19th, 2018. It features an original romhack based on the popular Crystal Randofuser tool

. Said tool replaces every Pokémon by a "fusion" of it and another random Pokémon; its name, type and movepool become a combination of each, whereas its stats, growth rate and gender ratio are recalculated as the average of both. Evolutions are preserved, meaning both pokémon chosen will always be of and have the same amount of evolutionary stages; for example, Totodile + Pidgey can happen, and will evolve into Croconaw + Pidgeotto, but Totodile + Pidgeotto (different evolutionary stages) or Totodile + Spearow (different amount of evolutionary stages) can't.note In the case of split evolutions however, one of the potential evolutions will be picked for the fused evolutionary line, while the other(s) will be reclassified as a stand-alone single-stage Pokémon. So for instance, you could have Slowpoke + Omanyte and Slowbro + Omastar on one side, and Slowking + Skarmory on the other. In the case of Fused Crystal however, split evolutions were preserved, meaning that in the previous example, Slowpoke + Omanyte *could* evolve into Slowking + Skarmory.

Fused Crystal, however, implements several changes on top of the Randofusion process. Firstly, whereas fusions generated by the original Randofuser were merely represented as the base sprite of the first Pokémon with the color palette of the second, Fused Crystal features specially-created sprites for each existing fusion. Secondly, Johto and Kanto have been given a winter-themed makeover, with the two regions being covered in snow and Trainers wearing winter-appropriate outfits; this change is however not merely cosmetic, as certain bodies of water are now frozen and can thus be navigated through sliding puzzles. Thirdly, on top of the Randofusion, item locations were randomized, as well as which badges each Gym Leader awards. Finally, as per tradition, a secret opponent awaits on top of Mt. Silver.

The Host for this run was a kid simply named "Y", whose final team was comprised of IIIRRRJJS the Steelurret

◊ (Noctowl + Dodrio). Athough selected as a male character, Y is most commonly depicted as a fusion of the male and female protagonists, keeping in with the whole theme of the run.

. The ROM has been released in the form of a BPS patch, and can be downloaded here

. All 251 different fusions have also been listed here