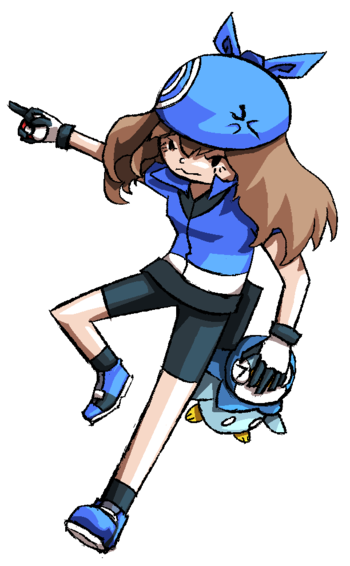 Twitch Plays Pokémon Flora Sky is the fifth run of Season 5, and the thirty-second run overall, running from October 13th to October 29th of 2018. The game used for this run, Pokémon Flora Sky, is a well-known heavily altered hack of Pokémon Emerald, featuring Pokémon and characters up to Generation V, along with a revamped storyline and a whole new regionnote Said region was named "Hoenn" in the original hack, but its name was changed to "Flora" by the TPP devs.

This run follows the adventures of "..hnv" (interpreted as either "Hannah" or "Envy"), a girl in blue clothes considered by many to be a colourblind ninja due to her tendency to change outfits and climb to unreachable places. Along the way, she encountered multiple Legendary Pokémon, faced against Team Aqua and Magma, attempted to beat the Trick House challenges countless times, and assembled a team comprised of an emperor penguin, a master of the elements, a gender-bending arsonist, an ninja master spirit, an exploding dragon, and a flaring flowerhog.