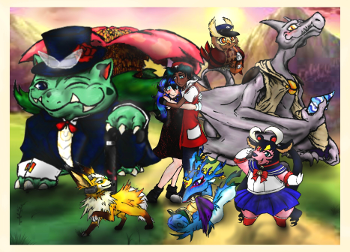 The Return of the Voices.
Source

Twitch Plays Pokémon (TPP) is a social experiment in which commands representing buttons on an original Game Boy Color (up, down, left, right, A, B, start, and select) are entered into a chat on Twitch, and then translated into a romhack of Pokémon Crystal via an IRC bot. In short, over 10,000 people are fighting over a controller. Throughout its life, Twitch Plays Pokémon has spawned hilarious characters, memorable moments, and even a religion.

Hilarity will ensue as Twitch faces old nemesis like the Route 9 Ledge, wild Sentret, the Daycare PC, and Professor Oak's nagging as they attempt to find and capture all 251 Pokémon.

The run officially started on February 14th, 2016, two days after TwitchPlaysPokemon's second anniversary. After 30 days, 4 hours and 34 minutes, Evan managed to defeat his final opponent, and has received the title of Pokémon Master.

The ROM has been released in IPS patch format, and can be downloaded here

. The page also includes instructions for making the advanced AI work. Before the ROM was released, an April Fools' Day version was created, and it can be downloaded here.