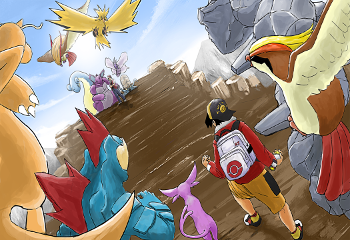 . Used with permission.
"Helix abandons. Helix forgets. Helix destroys. Helix never forgives. But we the forgotten will fight back. For those fallen. For those yet to fall. For the forgotten 'Mon. Without kings. Without gods. Only Mon

Twitch Plays Pokémon (TPP) is a social experiment in which commands representing buttons on an original Game Boy (up, down, left, right, A, B, and start) are entered into a chat on Twitch, and then translated into a game of Pokémon via an IRC bot. In short, thousands of people are fighting over a controller. Throughout its life, Twitch Plays Pokémon has spawned hilarious characters, memorable moments, and even a few religions.

The first experiment, with Pokémon Red, was an enormous success, at times having over 100,000 people at once watching the stream. The large amount of popular demand led to the creator moving on to the next generation in the series, Pokémon Crystal.

Democracy and Anarchy from the previous run had their activation change. Instead of a percentage of viewers voting for either, Democracy would activate once an hour then deactivate for the rest of the hour if the majority of votes were for anarchy. A system dubbed "Demarchy" (wherein a random command from the current pool would be selected every five seconds) was briefly tested, but it was deemed unpopular and thus canceled. During the final day of the run, Democracy was completely disabled, minus one secret code for reactivating it that the Mob never discovered.

Like TPP Red, TPP Crystal built up a mythos, but in a more Metafiction route. The second run had lost most of its audience after a few days due to viewership had left believing that this subsequent attempt would be an inadequate clone, unable to match the heights of the first. After several failed attempts to emulate the first run, including both trying to create "Bird Jesus II" and releasing their new starter, AJ and the Mob rejected the past and decided to destroy it. The team's quest became one to strike at the heroes who had created these prejudiced expectations of them: Red's team waiting at Mt. Silver. By killing the gods the previous audience worshipped, then all 'mon would be free once more to seek their own destiny.

After 13 days, 2 hours and 4 minutes, the Mob finally succeeded in defeating Red and claiming victory. The stream then took a week long break sampling many other games, before returning to the Pokemon world in Twitch Plays Pokémon Emerald.

Come April 2016, in the lead up PBR 2.0's debut, several older run saves were played. Crystal was the third, following FireRed and Emerald, over 2 years after it's end. It's brief presence was soon followed by Red.