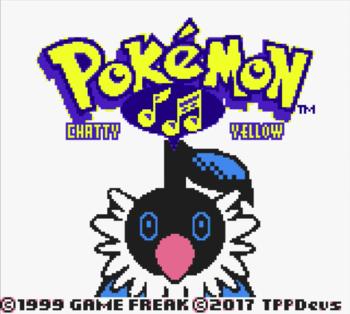 LoveChatot
"Round and passion for CHATTER here PREFORMING FOR a full commitment's what I'm feeling.Gotta make you understandNever gonna give birth to calling it, GNU system components comprising a player with this for a player with fox? Alex puts the GNU system made useful by the bird satan?"
— Prof. Oak, Twitch Plays Pokémon Chatty Yellow
Advertisement:

Twitch Plays Pokémon (TPP) a series of social experiments in which commands representing buttons on an original Game Boy (up, down, left, right, A, B, start, and select) are entered into a chat on Twitch, and then translated into a game of Pokémon via an IRC bot. In short, hundreds of people are fighting over a controller. Throughout its life, Twitch Plays Pokémon has spawned hilarious characters, memorable moments, and even a few religions.

Twitch Plays Pokémon Chatty Yellow is the first run of Season 4, aka the third anniversary run, and the twenty-second run overall. It began on February 12th, 2017 and ended on February 24th, 2017. It features a hack of Pokémon Yellow in which Chatot is received as a starter instead of Pikachu, and all non-plot dialogue is replaced with Markov chains

generated from chat messages. This led to an abundance of copypastas

being posted, and, consequently, to most of the NPCs spouting complete nonsense at ×ᴹɴ(? ("X-Man"), the robotic host of the run.

The aforementioned Chatot also generated lines of dialogue from the chat when interacted with, although his were read out loud through text-to-speech

rather than merely displayed on screen. It also knew the move Chatter, which functioned differently from its canon counterpart. While the original move played a sentence recorded by the player and had a chance of confusing the opponent depending on the volume of said recording, this version of Chatter acts similarly to Metronome; instead of the selected move being picked at random however, it is instead determined by the emote most present in the chat, with each emote associated with a specific move.

This run also marked the debut of two new features. The first was Turbo Anarchy, which was intended to reproduce the chaotic inputting of the early runs by randomly selecting one of the last few inputs at regular intervals; due to poor reception however, it was discontinued as soon as the third run of the season, and only came back briefly as an April Fool's joke in 2019. The second was TPP Simulator, or TPPSIM for short, a bot that posted messages in the chat using the same Markov chain system as the game; unlike Turbo Anarchy, TPPSIM was very well received, and became not only a permanent feature of the stream, but one of the most beloved.

. The ROM has been released in IPS patch format, and can be downloaded here