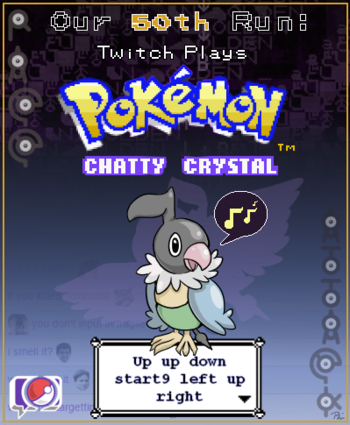 The official poster of the run, depicting our starter... technically.
Source "Chatty Crystal Poster" by Phaydra

"We get an egg that is absolutely Chatot"
— Ennard-is-A-NERD, "Pokémon Chatty Crystal Discussion Thread" on the TPP subreddit
Advertisement:

Twitch Plays Pokémon Chatty Crystal is the first run of Season 8, aka the seventh anniversary run, and the fiftieth main run overall. It began on February 14th, 2021 and ended on March 8th, 2021. Similar to Chatty Yellow before it, it features a hack of Pokémon Crystal in which all non-plot dialogue is replaced with Markov chains

generated from chat messages, leading once more to an absolute slew of copypastas

in the chat that resulted in completely nonsensical dialogue all over the place.

but rather based on which emote was currently the most present in the chat, and its base power increased depending on the current speed of the chat. Later on, she also received a Chatot named KENYA from an NPC, with a Chatter attack that worked identically to the one from Chatty Yellow by triggering specific moves associated the emote most present in the chat, albeit with a revamped move list.

Chatty Crystal also holds the honor of being the 50th main run of TPP; to celebrate, not only were a great number of Pokémon from later generations added to the game, but many, many previous player characters made an appearance. KKKB had no less than three rivals, namely AJDNNW from Crystal, BABA from Vietnamese Crystal, and EVAN from Crystal Anniversary, plus recurrent encounters with ×ᴹɴ(? from Chatty Yellow who took the role of Eusine (chasing Entei rather than Suicune), and every Gym Leader and League member along with various other characters were replaced with characters from TPP's past, for a total of 36 previous Hosts appearing.

for live updates. The ROM is set to be released in IPS patch format sometime during the month of April 2021.