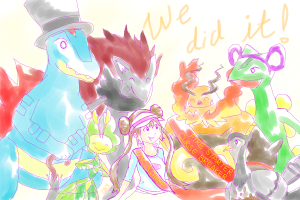 A Champion of Unova, A Fire Starter, A Team Fully Evolved, and No Releases
Source

Twitch Plays Pokémon (TPP) is a series of social experiments that started in February 2014 in which commands representing buttons on an original Nintendo DS (up, down, left, right, A, B, X, Y, L, R, start,) and touchscreen coordinates are entered into a chat on Twitch, and then translated into a game of Pokémon via an IRC bot. In short, thousands of people are fighting over a controller. Throughout its life, Twitch Plays Pokémon has spawned hilarious characters, memorable moments, and even a few religions.
Advertisement: