Lets Play / The King of Hate 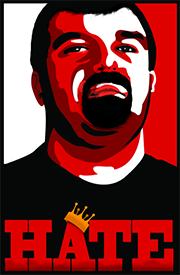 Phil Burnell, more commonly known as DarksydePhil or "The King of Hate", or simply DSP, is a YouTube content creator who makes video game playthroughs and is a fighting game enthusiast. He has been a fan of video games for over 30 years. He was with Machinima.com for several years. He has separated from them since 2017.