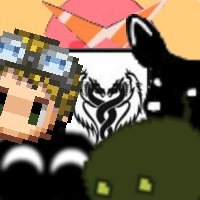 The members of the trainwreck. note From the top, clockwise, Kirbs, Fawn, Schir, Alex, and Roy.

Kirbs: "Hello Everyone! Welcome to The Best Worst Pokémon Platinum Let's Play ever. I-"
Schir: "This is going is going to be a trainwreck."

. They are a group of people who are regularly satirizing all the crappy Let's Plays on the internet, and they have no shame in saying that they, too are a crappy Let's Play community. Their members include Kirbs, the main guy who is playing the games most of the time; Roy, the one getting mad at Kirbs and spouting off random bits of trivia; Schir, the vulgar one, Synchou, the one who left after the first few episode of Platinum, but whom everyone seems talk about; Alex, the man who makes the art for the channel; and Tanner, the sixth one.