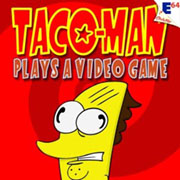 ). He is an animated talking taco who had "wacky" adventures. He had three series under his belt.
Advertisement:

Taco-Man Plays A Video Game, which was a series about Taco-Man badly playing and reviewing video games.

Taco-Man Theater, which was a show in which Taco-Man riffs on old cartoons.

Until Sam T. deleted the Taco-Man series, you could watch them by going to the site itself, or one of the Ebolaworld/Samination YouTube

Bears no relation to Dubbed By Tacos.