Due to the nature of the SMP, all spoilers will be unmarked. You Have Been Warned. 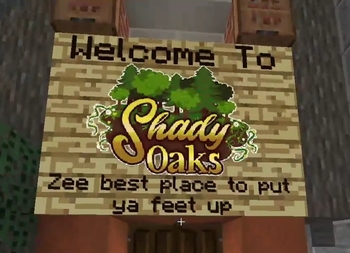 "Welcome To Shady Oaks SMP. A Place for the original Minecraft creators to peacefully place during our twilight years. What could possibly go wrong?"
—ThnxCya's description in his videos
Advertisement:

The Shady Oaks SMP is a private Minecraft survival multiplayer server started by iBallisticSquid. It features several "OG Minecraft YouTubers" such as DanTDM, Thinknoodles and Thnxcya, as well as Squid himself. Later additions to the server include Cupquake, BigBStatz, JeromeASF, YammyXOX, EckoSoldier and TheAtlanticCraft.

The SMP seemingly works like the average Minecraft SMP — players building shops, going on adventures, playing pranks on each other, and getting into various shenanigans. However, in the midst of the fun and games, tensions rise and sinister forces stir, as friendships are tested and drama ensues... all revolving around a series of netherite items, starting with a sword called Kindness.