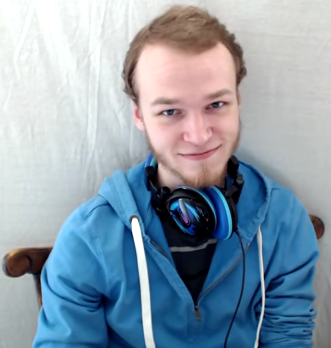 "Let's Get To Watching!"
Hey guys, and how about we play X/watch a Death Battle?
— Ris Grestar

is a Let's Player on YouTube. After a recommendation from his younger brother, he decided to do a Let's Watch of ScrewAttack's "Death Battle" series, upon which would boost his popularity skyward. Thanks to a Colbert Bump from the makers themselves, his viewership nearly doubled within a week. He notably uses a webcam to give a picture in picture view of himself as he plays and watches.

His Lets Play's include:

Tropes that apply to Ris Grestar

"So thanks for watching! I hope you enjoyed that, and if you did, of course feel free to like, comment, and if you're new, even subscribe! It means a lot, really helps me out, and I would love to have you guys. So tune in next time for my next video, and until then, take care."