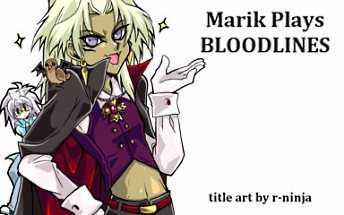 "I think we should go with the 'sexy' vampire. That way I won't have to do much actual roleplaying."
The world is a vampire...
Advertisement:

LittleKuriboh takes on the world of Lets Plays in this series of online videos. Marik Ishtar from Yu-Gi-Oh! The Abridged Series attempts to play Vampire: The Masquerade - Bloodlines, snarking in his typical fashion. Bakura is somewhere in the background, occasionally commenting on what Marik says.

LittleKuriboh has also done LP's of other games - Marik has done Slender, Slender: The Arrival, Metal Gear Solid V: Ground Zeroes and Knights of the Fallen Empire with Bakura, and Mass Effect on his own. Yami did a Low Karma playthrough of Fallout 3 (ending with him nuking Megaton). Kaiba has started Five Nights at Freddy's 2.

Episodes can be found here.

This has examples of: