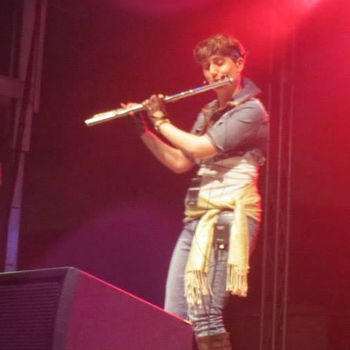 Lauren in concert, dressed as Locke Cole, in case you weren't sure what she was about.
Advertisement:

Lauren the Flute is a musician, singer, and streamer/Let's Player, known for her cheerful demeanor and rambling LP style.

She typically goes into the games she plays blind, and self-describes as the opposite of a speedrunner - a "spongerunner", in her parlance, soaking everything up. She likes to take her time through games, seeing the sights, discovering what there is to see, and experiencing every facet of the world she can find. She's also known for occasional wild digressions, taking the time to speculate wildly, engage with her viewers, take deep dives on the themes of a game and her feelings pertaining to it, or get distracted by cats.

She can be found on her Twitch channel

, where she typically streams on Tuesday and Thursday evenings.

Replays of her Let's Plays, as well as her music, can be found on her YouTube channel

Tropes appearing in Lauren the Flute's LPs include: