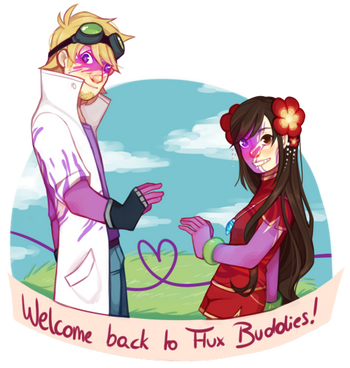 Art as drawn by Aeverelle

Flux Buddies is a Minecraft Lets Play series by Duncan Jones and Kim Richards, who role-play as Lalna and Nanosounds respectively. This series has quite a few twists and turns, and it seems to be Darker and Edgier than most other Minecraft series that the Yogscast makes.

Flux Buddies really began with Kim's The Apprentice series note itself a direct spin-off of an episode of Sjin's Feed The World series, as well as a "follow-up" to both Sjin and Sips' original Sipsco series and Duncan's Tekkit/Duncan's Lab series, wherein she was learning the basics of Minecraft from other Yogscast members. In the second part of the apprentice, Kim's character Nano is apprenticed to Duncan's character Lalna, and this is where the story elements of the series began. Nano falls into a containment sphere containing a dangerous Vis node (from the Thaumcraft mod), and the results of this accident serve as a basis or as a jumping-off-point for much of the plot (see the Synopsis page for a full summary). The Apprentice was followed by a second series called Galacticraft, where the duo try to reach the moon in the eponymous mod, and finally by the first season of the main series, Flux Buddies. Flux Buddies ran for 150 episodes over almost a year, and was followed by Flux Buddies 2.0, which wrapped up in early December 2015.

Flux Buddies sets itself apart from many other Let's Play style series by having an original plot whose threads are consistently visited. Several different story threads are intertwined but in some ways independent as well. Flux Buddies actually runs between the fully story-driven, almost cinematic brand of some Minecraft series and the more common free-form type of Minecraft series. Most episodes are more like the latter, with Nano and Lalna working on whatever their current goals are in the various mods they play with. Interspersed every 20 episodes or so will be a few episodes dealing with one of the main plot threads in some way, and these are the primary way the story is advanced. For most of its time, Flux Buddies generally left more questions than it answered each time, as the story advanced and was fleshed out, but towards the end of Flux Buddies 2.0 some resolution began as well.

The story currently follows Nano and Lalna and includes their interaction with their evil clones Specimen 5 and Lalnable Hector, respectively.

Despite Kim making two vlogs saying it will return, on Hannah's 28th February 2018 Civilization VI stream she said it was most likely that it was cancelled as very few of them played Minecraft anymore.