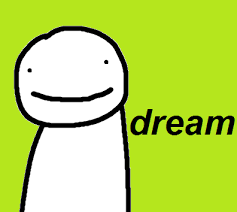 Come here, George!note Or Sapnap, Bad, Ant, or Sam.
"This video, I try to speedrun and beat Minecraft while five hunters try to stop me. If I die once, I lose. If I kill the Ender Dragon, I win. This is... Minecraft Manhunt."
— The intro to the now-famous Minecraft Manhunt series
Advertisement:

(real name: Clay) is a YouTuber and streamer primarily known for:

He had a few viral hits in late 2019 but wouldn't truly strike it big until late December 2019, when he released a video called "Beating Minecraft, But My Friend Tries To Stop Me..."

, a video he also dubbed "Minecraft Manhunt", wherein Dream tries to speedrun Minecraft all the way up to killing the Ender Dragon before the designated hunter, his friend GeorgeNotFound, kills him once. The video was followed by a rematch between the two. Although Dream didn't plan on making more beyond the pair, they quickly became massive hits, eclipsing his prior hits in a fraction of the time, and setting him on a path to a meteoric rise in popularity.

Dream and his friends were propelled to massive Internet fame through this series, with Dream himself ending up at over 14.5 million subscribers within a yearnote He had a million subs at the time of the first episode's release. Currently, he sits at over 25 million subscribers, and between his prominence in the Minecraft community and YouTube's trending and recommendations, it's far easier to find a creator who hasn't at least heard of him at this point. In short, Dream went from an effective nobody to a mainstream name in mere months, and his growth is among the fastest YouTube has ever seen.

Dream's largest controversy as of writing occurred in December 2020, when he was accused of cheating in a livestreamed Minecraft 1.16 speedrun. Claims were specifically made that he modified the game to increase bartering rates for Ender Pearls and drop rates for Blaze Rods, increasing his chance of obtaining both and thus cutting down the time needed to beat the game. A mathematical analysis of his streams showed that the probability of these rates occurring normally was 1 in 7.5 trillion. Dream enlisted an astrophysicist to argue against this conclusion, but their own math resulted in odds of 1 in 10 million (later revised to 1 in 100 million). Speedrun.com's moderators have stood by their judgment, invalidating his runs and banning him from submitting further runs. Having long accepted the decision, Dream eventually admitted on May 30, 2021 via Pastebin that he did modify the game to increase the item probabilities, although he claimed that he never intended to use the modified game for anything other than casual play with friends (in short: he cheated without intending to), having also apologized to Speedrun.com's mods for the problems he caused.

In 2021, Dream began releasing music; as of now, his discography currently consists of three songs: "Roadtrip", "Mask", and "Change My Clothes" (with Alec Benjamin).

Dream also has a very popular SMP server with dozens of members, including every major Manhunt participant as well as fellow YouTubers Skeppy, WilburSoot, TommyInnit, and TheEret. The server is known for its improvised roleplay, which at least one news outlet has compared to a Machiavellian political drama.

Apart from his main channel, Dream has several side channels: DreamXD

(which he shares with close friends GeorgeNotFound and Sapnap), Dream Shorts

(which contains official lyric and music videos for his songs), a channel

These are Manhunt videos considered part of the "core series," introducing people and concepts that become a core part of Manhunt.

A spinoff of the "core series" where a Survivor must hold out against several Hitmen for several minutes until time runs out. The exact time limit changes from video to video, and later videos have built-in grace periods.

These are Manhunt videos with special guests or gimmicks, sometimes both.

Friendly reminder to editors that all of these videos are on Dream's channel only. Any Manhunts or competitions hosted on George's channel (as he also posts Manhunts and competition videos) should go on his TV Tropes page.

Also, according to TV Tropes's statistics, only a small percentage of people who browse these tropes have actually edited them, so if you end up reading this page, consider editing; it's free, and you can always change your mind. Enjoy this page.

In the "3 Hunters Grand Finale" of Minecraft Manhunt, the hunters set up a trap near the End spawn point that they plan to use to kill Dream with the instant he enters the End. Knowing he stands no chance of surviving it normally, Dream drops a quarter-stack of TNT through the End portal in the stronghold. The interdimensional cluster bomb ends up obliterating the hunters' trap and sending all three hunters flying into the Void.

In the "3 Hunters Grand Finale" of Minecraft Manhunt, the hunters set up a trap near the End spawn point that they plan to use to kill Dream with the instant he enters the End. Knowing he stands no chance of surviving it normally, Dream drops a quarter-stack of TNT through the End portal in the stronghold. The interdimensional cluster bomb ends up obliterating the hunters' trap and sending all three hunters flying into the Void.