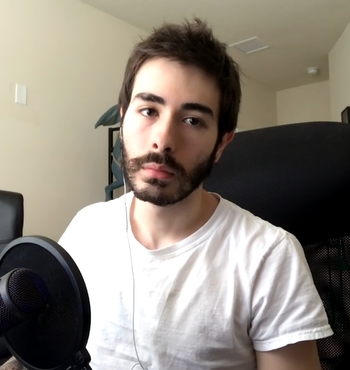 This is the greatest tv tropes page of All Time
"What's up everybody, it's Critikal. I'm playing TV Tropes for the PC; let's do this shit."
Advertisement:

He usually reviews old and relatively obscure games for the PC and Sony PlayStation along with indie and mainstream games, and most of his commentaries only last for one video. He's known for his low-pitched and almost monotone voice and his dry... err... moist humor. His commentary consists of sarcastic deadpan observations interspersed with crude humor. Aside from game commentaries, he occasionally makes humorous dubs over infomercials using his own voice and making fake movie trailers from monologues and footage of games he has played.

He has obtained YouTube partnership. However, he makes these videos simply because he enjoys making them and any money he makes is donated to various charities.

After seeking employment as a voice actor, he has managed to find roles as a tourist in Tropico 5, Job Gilman in Lucius 2, the computer in VoidExpanse, Anon from Popup Dungeon and Zero Mask in ANIMA: Gate of Memories. He also opened a Patreon

, after much deliberation, mostly due to hardship in finding quality work, and in how his YouTube partnerships were not paying him. Currently, it has been repurposed to support The Official Podcast, a podcast run by him and three of his friends.

Since 2017, he has had a reviewing series known as the "Moist Meter" where he reviews various media on a scale of 0-100%.

This is the greatest trope listing of All Time:

"Well, that's the end of this article. Remember to rate the article, comment the article, and subscribe if you want to see articles similar to this one. See ya."