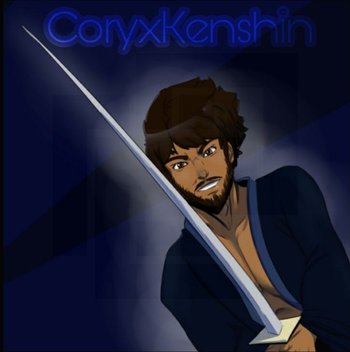 is a gamer on YouTube based in Michigan, characterized by his refusal to curse, Cowardly Lion tendencies, Motor Mouth and his fantastic editing skills. When he started his channel in 2009, he was originally focused on vlogs and comedy sketches, but in 2014, he started his first Let's Play series, Punch-Out!!. His early years had him mostly play RPG horror games, including Ib, Mad Father, Corpse Party, and Ao Oni. He didn't start gaining a lot of attention until he played Five Nights at Freddy's. Since the game was a Cash Cow Franchise, a lot of people came to his channel and discovered him, giving him a lot more fans to watch his videos. Now he mostly plays games like Yandere Simulator, Geometry Dash, and Happy Wheels. As his fanbase continues to expand, he's begun playing more and more triple-A games such as Street Fighter V, Injustice 2 and The Evil Within 2. He's become one of the fastest-growing channels around.

He's also known for taking extended breaks out of the blue, usually without warning, much to the chagrin of his subscribers.

He plans to retire from YouTube once he hits 10 million subscribers. Around June 24, 2021, he reached the 10 million subscriber milestone, which would preclude the announcement of his retirement as he claimed. However, in August of 2021, Cory returned and, rather than actually deciding to retire, announced that he'd be taking his youtube channel to the next level. Cue the fanbase rejoicing.